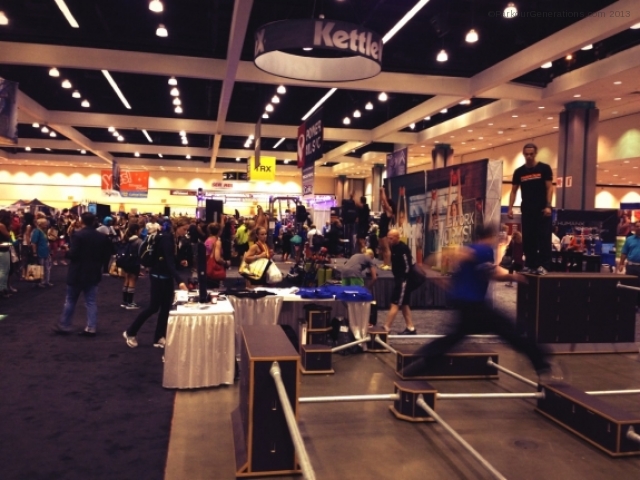 This past week has seen us introducing parkour in various ways to one of the world’s largest annual professional fitness events, the Idea World Fitness Convention in Los Angeles, USA – and having a great time while doing so.

It was our first time at Idea, the first time in fact that parkour has been officially presented to the leaders of the fitness industry in North America, and needless to say the discipline was met with great enthusiasm and interest by those fitness professionals, educators and personal trainers who are always trying to stay on the cutting edge of personal physical development and excellence. Plus, they’re always up for a challenge and aren’t afraid of a little hard work… perfect ingredients for a few days of proper training.

Armed with our Freemove portable training equipment, the PKGen activity space in the main hall was constantly busy with everyone from fitness professionals and sports coaches to enthusiastic children and unstoppable toddlers diving in and exploring their movement. PKGen Americas directors James Ballantyne and Blake Evitt were on hand with me throughout to show people the ropes and present challenges for the bolder participants – the hardest of which, the clean muscle-up challenge, only being completed by some 8 individuals over the 3 days, earning themselves a custom USB stick packed with video goodies. The team were most impressed, however, by two ten-year-old girls who demonstrated amazing coordination, skill, aptitude and fearlessness to progress at a fantastic rate. Zoe and Jayden both humbled many of the adult fitpros and have a bright physical future if they maintain that relentless enthusiam for movement.

One of the highlights of the event was reconnecting with out great friends at TRX, the suspension training system that has taken the fitness world by storm over the last 9 years or so. Fantastic to see Fraser Quelch again, TRX guru and master coach, and to meet the legendary Randy Ketrick himself, once-captain of Seal Team Six and founder of the TRX concept. Randy and Fraser have built an incredible team around themselves in trainers like Justin Ross, Ami McMullen and Kari Woodall, and we’d like to thank them all for their support and friendship, for letting us use their very cool a-frames for swinging, climbing and muscle-up fun, and for the outstanding parties they throw.. 🙂

The two practical parkour workshops on day three were very well attended and the brief insight we presented into our discipline was received with great zeal and anticipation. Everyone likes to move, and it seems that as we grow up we tend to forget to move in the playful, natural manner that is our heritage and, in fact, our true function.

‘Functional movement’ is a phrase you hear a lot in fitness circles these days, everyone seems to have it on the back of their shirts or in their sales blurb, and it’s good to see that movement is being emphasised so strongly in this way. But is the word being fully understood, I wonder? It has struck, as I’ve become immersed in this world of physical fitness, that there is sometimes a disconnect between the talk of ‘functionality’ and the actual movement practice. Let’s break it down a little.

1. having or serving a utilitarian purpose; capable of serving the purpose for which it was designed.

The human body is, obviously, designed to move. Our brain, as an integrated part of the entire nervous system, is in fact solely geared toward controlling movement – from the tiny to the very large – to enable us to breathe, walk, eat, talk, hold, stand, run, digest, everything. So the functionality of our bodies is to move in a human way; to get from one place to another, to adapt to any space or environment, and to keep ourselves safe while doing so.

We’ve evolved to run, jump, crawl and climb in order to hunt, fight, forage and travel, and our bodies have not changed in any significant way since our hunter-gatherer past. Those ‘functions’ require an enormous and intricate diversity of movement capabilities, a continuously adaptive blend of multi-planar, multi-directional actions utilising a combination of several, if not all, the major muscle and joint systems of the body at the same time. That’s functional movement, that’s what we are designed to do, and that’s what we have to do if we want to remain healthy, happy and able to reach out potential. And remember, we are evolved to be bi-pedal – so that should be the basis of most of our movement. Becoming an expert at crawling over tens of thousands of hours may be impressive, but it’s not how we were designed to spend our days. That’s why we started standing upright in the first place. Crawling: useful training tool, but don’t overdo it.

So is that what we are training? In parkour, yes. Without doubt. It’s functionality at its best, at its purest – overcoming real-world challenges, adapting to endlessly diverse spaces and terrain and finding ways to move over, under, around and through anything we encounter. It demands complete integration of all the physical attributes of strength, speed, stamina, balance, coordination, agility and spatial awareness with the critical mental attributes of focus, control, creativity, courage and confidence. And integration is health. Parkour is using the body/mind to its fullest potential: it means actually doing what most only ever train for.

Let’s be clear on this: squats and lunges, with or without a weight, are not holistically functional movements. Neither are pull-ups or push-ups. Nor even box jumps, burpees or bodwyeight levers. Don’t get me wrong, they are all fantastic exercises to develop strong physical attributes and improve the function of isolated elements of the whole musculo-skeletal system; they support functional movement but by themselves they’re only fragments of the body’s complete movement function. Remember, the function of the body is to move in an adaptive and applicable sense – and the only way to know if your body can do this is to ask it to actually move. To get up that wall, to cross that gap, to find a way over that rough terrain… to adapt!

What we’ve seen as fairly endemic to the fitness industry (with notable exceptions) is such an intense focus on the importance of these fragments of localised, functional training that people have forgotten that good, healthy, natural movement is the end goal. A case of the trees being pre-eminent and the forest being forgotten about entirely, it seems. Always keep this age-old maxim in mind: you do what you train. So restrict yourself to limited movement patterns in isolation and that’s all you’ll be capable of doing.

I think, and hope, that parkour can, in some small way, restore the completeness that is so often missing from physical training paradigms – remind people of their true movement nature and their innate physical capabilities. That’s one of our principal goals at Parkour Generations and we’ve seen it have a huge effect already on tens of thousands of people we’ve trained around the world. And with the incredible training spirit and hunger for knowledge that are rife within the professional fitness industry, I’m confident that it won’t be long before we start seeing some huge leaps in thinking around the importance of holistic and truly functional movement training.

We’ll certainly be back at Idea in the future, and we look forward to seeing everyone again then. Finally, huge thanks to Dana, Aprile and all the organisers behind Idea, and to everyone we met there who helped make it such an energetic and inspirational few days. Strength and honour!

Stretching yourself is vital.