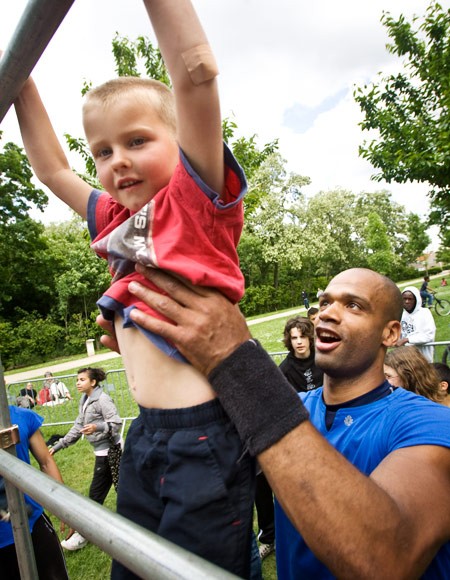 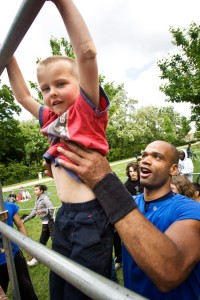 A human being is a part of a whole, called by us ‘universe’, a part limited in time and space. He experiences himself, his thoughts and feelings as something separated from the rest… a kind of optical delusion of his consciousness. This delusion is a kind of prison for us, restricting us to our personal desires and to affection for a few persons nearest to us. Our task must be to free ourselves from this prison by widening our circle of compassion to embrace all living creatures and the whole of nature in its beauty. – Albert Einstein

Who is your parkour for? What is the meaning of your training? What is the point of the risks you take, the hardship you suffer in training, the spectacular movements you make?

The founders, from the off, spoke in terms of being strong to be useful, to train for a purpose, to help those around them – friends, family, social group, neighbourhood, an ever-widening circle. The original motivation behind the birth of art du deplacement – parkour and freerunning as it has come to be known – was to make oneself capable and complete, mentally and physically, able to meet any challenge, undertake and achieve any task, overcome any adversity. To shape who we are through exploration, discovery, effort and freedom, through constant testing and training, in order to be able to be of use to others. To be of use.  A truly holistic concept.

Has that been lost, I ask? I see parkour everywhere now, to the point where competitions and televised contests have become normalized and producing videos has become a goal in itself. Yet is this parkour? It has the outward form of it, yes; the movements, the physical power and control, the awe-inspiring jumps and singular grace that are the signatures of the art. Externally, the quality is beyond question. But is that all parkour is now, all it has become? What of the motivation? What of the internal quality? Has that been lost? The answer is not mine to give, it’s yours.

As the discipline has expanded, opened up to thousands, tens of thousands more practitioners and been exposed to new influences and demands as well, it has inevitably evolved. It has become sanitized in some places, diluted in others, altered beyond recognition in yet more. It has been used, shaped, exploited, improved upon, misunderstood, lost by some and found by others: all within a decade of being discovered by the world at large. In my own lifetime alone I have seen fighting arts that have gone the same way, with an original idea that – through popularization – became obscured until it faded away altogether, leaving a shell that bore a physical resemblance to that original idea but little more. It appears to be the way of things.

But must it be? Parkour has so much to offer the practitioner, and through that practice so much to offer the world beyond and around the practitioner. And modern civilisations, one could confidently argue, are more in need of the strengths, the values, that parkour has at its core. However, those strengths are not found in the television shows, the big jumps, the sponsorship-seeking: they are found in the self-knowledge gained through constant testing, the inner confidence that arises through facing one’s fears, the humility and camaraderie that come about through training with one’s friends and family. They are found in that which the movement brings us, not the movement itself.

I have always believed that that strength at the heart of parkour need not be lost; that it can be maintained and passed on to each new generation and so go on to help, if only in some small way, the societies we live in. For me, that is the meaning. For that to be lost, for parkour to become just another pale shadow of a great idea like so many of the fighting arts, would be a sad thing indeed.

It can be avoided, I’m sure of that. But the spirit of parkour is not some lofty concept, some ideal that floats insubstantially through the back streets of Lisses, Evry and Sarcelles. Nor does it dwell only in the murky history of the art, known only to a select few practitioners. The spirit of parkour exists and is kept alive within the nature of the practice of every individual who takes it up. In that way our intentions, our approaches, our understandings shape parkour and its future every day. We affect it, in some small but significant way, in every training session, in every encounter with non-practitioners, in every demonstration, in every jump, in every portrayal, in every television interview, in every discussion, every interaction. It’s a living thing. Active present. It all matters.

And what matters the most is what it brings to your life, and what in turn that enables you to do for those around you.