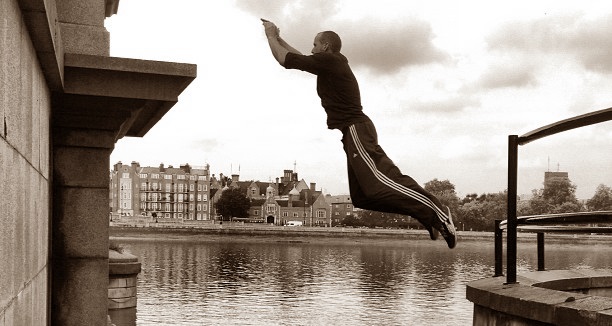 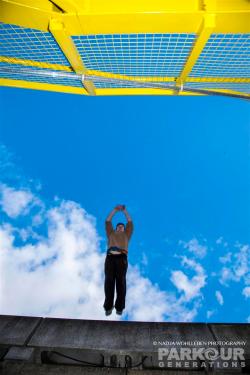 Parkour – that explosive visual spectacle of superhuman movement feats you now see in every Hollywood action movie and TV commercial around the world. At least, that’s how the majority of people think of it, their exposure being limited to YouTube videos and those very same movies that idolise the big jumps and acrobatic manoeuvres that have captured popular imagination.

The truth of what Parkour actually is, however, is very different. Those grand stunts and moments of spectacle are simply a by-product of what is, in fact, a rigorous, disciplined and highly sophisticated integrated movement practice: a practice that seeks to restore an individual’s full physical and mental potential by harnessing their true natural movement and by immersing them in a ‘flow’ state for almost the entirety of their training time.

Parkour brings about these incredible physical results in its practitioners due to the fact that it is a truly holistic practice. There are no isolated movements, no redundant ineffective movement patterns and there is no zealous focus on deconstructing or over-programming our natural movement to the point that it becomes something unnatural and, frankly, not useful.

And this isn’t due to some magic ingredient or unexplained process. It’s simply that holistic movement disciplines such as parkour engage unconscious movements, reflexes and actions controlled by the autonomic nervous system, which is the opposite of analysed movement. Thinking too much about a movement process usually interferes with it, preventing optimal performance. Throwing objects (or indeed pointing) at targets is an example of this – the body doesn’t require analysis in order to be able to aim and hit the target, if one just lets it happen without thought. We’ve all been in that ‘zone’ of optimal performance where we don’t think, we just ‘do’ and somehow we achieve whatever goal we set out for in that movement. 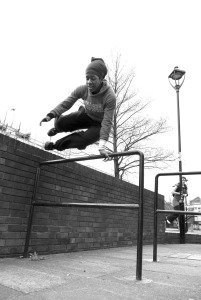 Dr. Gabrielle Wulf, Director of Motor Performance and Learning Laboratory at the University of Nevada, stated that focusing on isolated body movements increases consciousness and ‘constrains the motor system by interfering with automatic motor control process that would ‘normally’ regulate the movement,’ and therefore by focusing on the movement outcome – read ‘task-oriented movement practise’ – one allows the ‘motor system to more naturally self-organize, unconstrained by the interference caused by conscious control attempts.’

The number of people we have welcomed into Parkour training from more ‘traditional’ fitness paradigms who have quite simply lost the ability to move with their rightful animal athleticism – their true human heritage – has been shocking. And I believe that’s a direct result of over-programming, isolating and deconstructing movement when often there is simply no need. What’s been fantastic, however, is seeing those same people then reclaim that physical grace and agility through returning to the joyful, challenging culture that is Parkour.

Parkour is predicated on overcoming movement challenges that require constant adaptation to an environment that is not uniform and not linear, and that’s a vital element. We call this ‘task-oriented training’, meaning that we focus on undertaking and completing movement tasks or challenges that require not only good physical attributes but also problem-solving abilities, adaptive thinking and mental control through the management of risk and fear. This creates a powerful cocktail that pushes practitioners into a ‘flow state’ in which their bodies and minds are aligned, unleashing their instinctive, innate athleticism.

But this isn’t primitive movement. Buzzword phrases like ‘primal movement’ and ‘primitive movement’ are all the rage now and, while I see the motivation behind their use, I don’t see Parkour as primitive at all – it is, in fact, hugely sophisticated movement, with complex biomechanics and the constant management of forces such as gravity, elastic recoil, torque and momentum.

It’s simple in form but sophisticated in substance. And it’s that sophistication that produces such incredible athletes capable of mastering their environment in ways that have never been seen before.