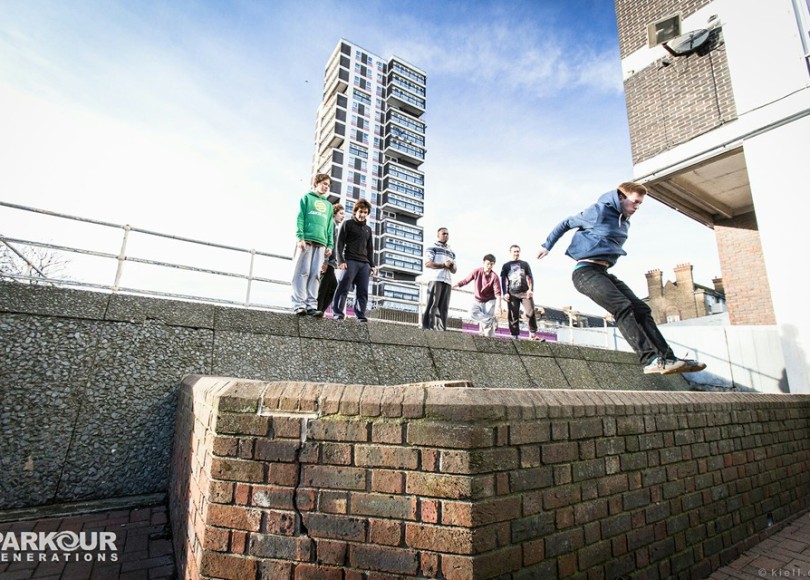 One question I’ve been asked countless times over the years by fitness professionals, physiotherapists, sport scientists and general public alike is how do you (parkour practitioners) not break things, explode joints and generally cripple yourselves taking all those impacts from jumps? And looking through the lens of many recent models of human movement – typically those that deconstruct and treat the body as an automaton – the question is an obvious one, as it just doesn’t seem to make sense or adhere to prevailing theories of what the human body can safely withstand. So how do we do it?

All good parkour practitioners know, empirically and intuitively through their training, that the body is exceptionally good at absorbing, redistributing and redirecting force IF one’s movement patterns and biomechanics are healthy, good technique (read ‘form’) is observed and sufficient whole-body strength is in place. Most practitioners wouldn’t know, or need to know, more than that – they know it works, it feels good, and they continue to grow more capable in movement year after year. Does it contradict traditional theories? Probably means the theories weren’t accurate then.

But science does have a tendency to catch up with the trails humans blaze through experimentation and application, and the recent understanding of just how much our fascia does has unlocked a piece of that puzzle that has mystified so many observers of parkour.

Put simply, the entire body is an incredible force transmission system and it is NOT only the muscles that are absorbing and expressing these forces. How much a muscle can absorb can, to a degree, be isolated and measured and to treat that as the limit of what a body can absorb would be to limit quite severely the understanding of our true potential.

The body is a whole, that much is clear and obvious, and if it is allowed to act as a whole (by avoiding the deconstruction of movement skills or the unbalancing of the body through over-development of certain areas to the detriment of others) it will naturally act as one large, interconnected system of coiling and uncoiling springs. 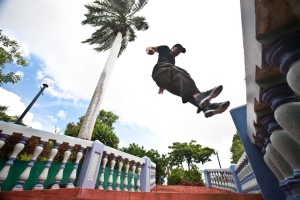 Landing forces – those which are not redirected away from the body first – can and should be absorbed and distributed throughout the entire body of connective tissue, allowing seemingly extreme impact forces to be handled without damage and in fact then utilised through recoil and elasticity to empower the next movement. Utilising these ‘free forces’ – ground reaction force, momentum, etc. – parkour trains the practitioner to redirect much energy away from the body, often through a well-timed roll, and to have the correct form upon landing to absorb any force remaining in a manageable fashion.

Jumping is one of the most fundamental forms of human movement, and is something we do so naturally and well as children and then typically stop doing as we grow up, thus losing our connection with this hugely powerful action. Most people limit their jump experience to quite limited forms such as the linear and mechanical ‘box jump’ so often seen in gyms, but this just isn’t enough. Running jumps, broad jumps, precision jumps, drop jumps, rebounds, strides… the list of jumps we can master goes on and on, and it’s precisely that variety in movement that creates the true athlete. Parkour has helped put jumping back on the map and everyone would do well to rediscover this incredibly potent activity.

The Biomechanics of Landing and Rolling

To learn these vital movement skills, attend a class or workshop via

Is it hard? Good.